I've noticed that people talk less and less about The Russian war against Ukraine.
Prior to a few months ago, the area of Ukraine known as Donbas was probably unknown to most of us. Now however, thanks to Putin, it has become a byword for destruction and genocide; for which he must  eventually pay the price. 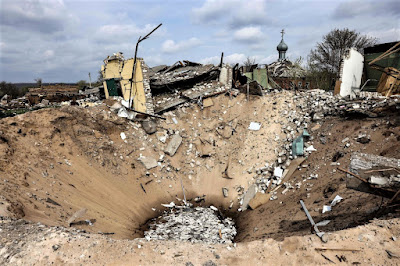 The Donbas region is (was) a major historical, cultural, and economic region of South Eastern Ukraine, it borders Russia to the North, the East, and the South East.
President Zelensky has now declared the region totally destroyed. Putin's troops have thrown their all at the area; having mostly failed elsewhere.
The question must surely be; now that the Russians have made the area unliveable-in, and destroyed every vestige of industry, and agriculture, WHAT DO THEY INTEND TO DO WITH IT?
Will they unfold their deckchairs and admire their newly conquered land? Will they spend a fortune rebuilding it all? Or will they simply go home and count the cost of their losses during its destruction?
So well done lads. You've slaughtered, tortured, and reeked havoc, and you have now gained a vast area of 'scorched-earth-policy' land. You must all be feeling very proud of yourselves.
Posted by Cro Magnon at 04:53