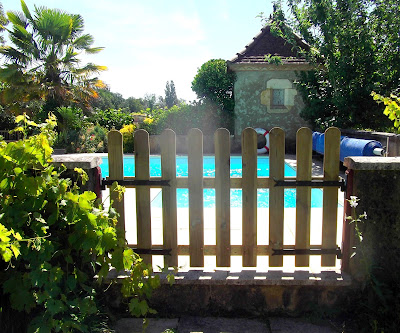 Certain jobs get put to the back of the queue, simply because they are either tiresome, or not overly urgent.

The pool gate was one such job. It started off as a piece of fencing which flew off the car roof-rack, had to be reassembled, then made to fit the hole left by the previous rotten one.

Since the above photo was taken it has been cut in two, had all its fittings attached, and given a really good coat of 'diesel oil' as a preservative. The top has also been rounded to give it a softer look. 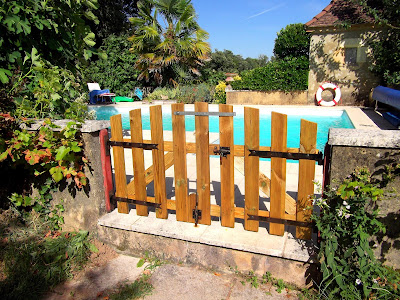 We've having daytime temperatures around 35 C at the moment, which, frankly, is too hot for me.

All essential work is done in the mornings, anything not essential just has to wait. I'm on holiday. It's siesta time.

Everywhere is dry, dry, dry. Even watering does no good, the water evaporates far too quickly. We need rain.

Simple salads for lunch, and quick-n-easy dishes for supper; with plenty of 'Magnums' and swimming in between.

Tourists are everywhere, they stay up till 'all hours', shouting, laughing, and playing ghastly music.  Summer is with us, and occasionally it's all invasive.

Yesterday it was 39 C, and the air smelt as if it was about to catch fire. 39 C is the temperature at which humans melt. 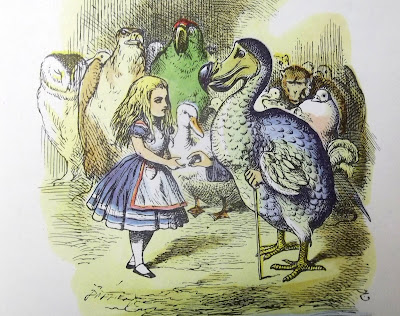 
Since 2012, when Bradley Wiggins first won a Tour de France, all subsequent tours, but one, have been won either by Brits, or in one case a member of the Brit team Sky/Ineos.

France, which is a country dedicated to cycling, is not happy; they expect a Frenchman to win. They spat at the Brit team riders, shouted nasty things at them, and even slapped them as they passed by.  The worst example of bad sportsmanship imaginable.

Normally on hot afternoons in July I tune in to watch the final 15-30 mins of each day's stage; it's a major part of my sporting year. This year the tour has been rescheduled to run from August 29th to September 20th (still not confirmed). My fingers are crossed, and I'm looking forward to it, but it won't be the same; a bit like watching a test match at Lord's over Christmas.

Sir Bradley is now retired, divorced, and going through the bankruptcy courts after having to pay his lovely ex all the rewards of his hard work.

I do hope someone will find him some paid work as a commentator. 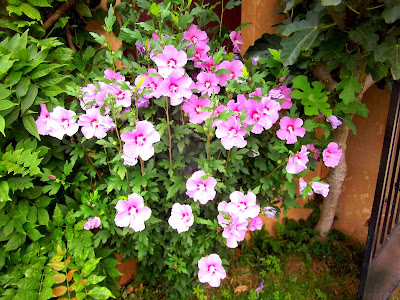 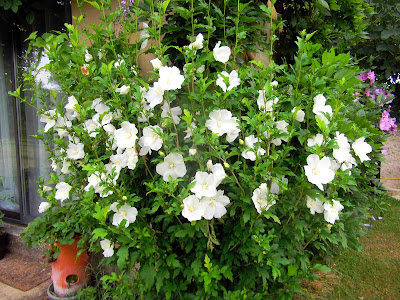 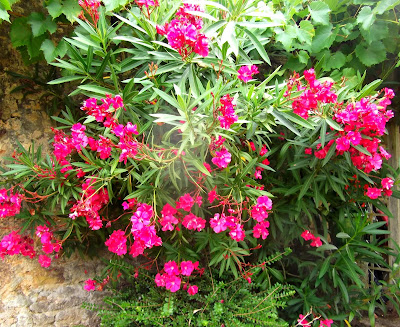 All beautiful flowers that, for me, are emblematic of the South of France. It was 37C when I took these photos yesterday afternoon; far too hot.

Somewhere to put my 2B pencils.

Buying clothes (or shoes) online, is fraught with danger. Your package could contain too small, too big, wrong colour, cheap and tacky, or just plain unlike anything you thought you'd ordered.

I needed a new 'working jacket'; something any self respecting painter could wear without feeling ashamed of him/herself.

I rather fancied a classic French Blue Workman's jacket; but in black. I couldn't find one, but I've seen them around, being worn; so they must be available somewhere.

What I did find was the below. A classic working man's jacket, made from heavy denim, and with plenty of pockets for pencils pens etc. 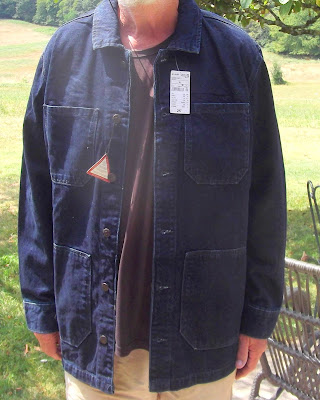 The jacket was originally priced online at €25, but had been reduced to about €10.50 including postage.

When it came to payment time it actually cost €7.50 including postage. A bloody bargain if ever there was one. 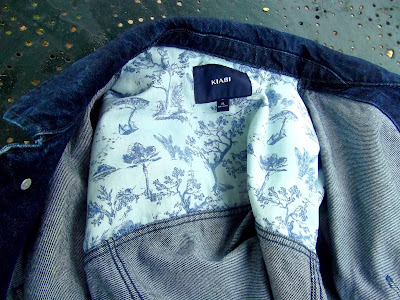 I'm pleased to say, it's the perfect size, the quality is far better than I'd expected, and, look, it even has a little fancy lining inside the top.

I can still hardly believe that it turned out so well. It came from that well known French Maison de haute couture, Kiabi (ahem). It didn't say where it was made, but I have my suspicions.


This is fun for the first forty seconds.... I wouldn't bother after that! 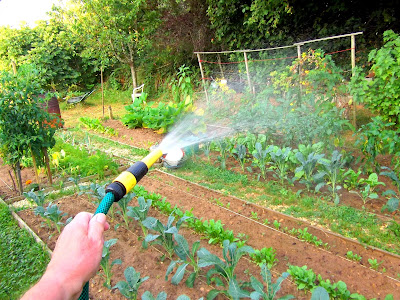 Everything is so dry, and poor old Haddock's is suffering. I water a bit every morning, but what it really needs is a good overnight downpour. Nothing on the horizon as yet; just more temps around 30 C. 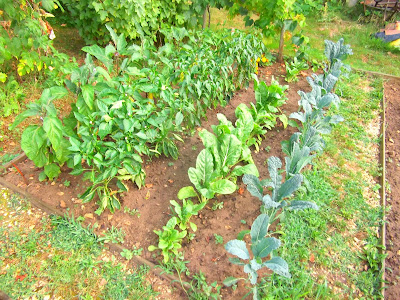 Still, it is now providing all the vegetables we need, and will continue to do so until about next March.

Of the veg's we are currently eating, there are Onions, Carrots, Courgettes, Peppers, Aubergines, Beans, and the first few leaves of Spinach. 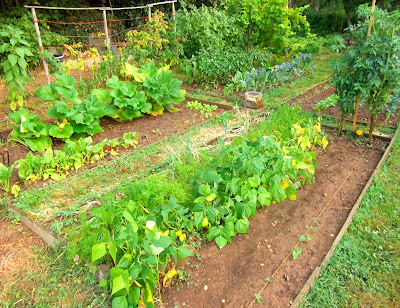 Our winter leafy greens are doing very well. I have put in plenty of Cavolo Nero, Swiss Chard, and Perpetual Spinach. Pumpkins and Squashes are also doing well.

As my winter bottling mostly resembles different forms of Ratatouille, I will soon have to buy several kilos of Tomatoes. Mine have yet again been a total disaster.

The weeds are mostly under control. 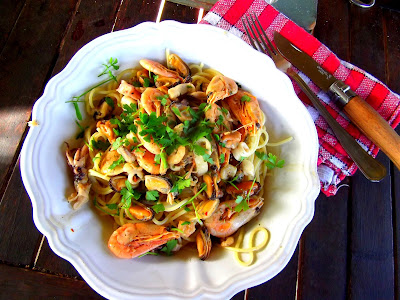 I never mention what I'm preparing for supper, I simply try to cook a variety of dishes that I know we both like.

However, at some point in the late afternoon Lady Magnon invariably asks "What's for supper?"

And here is the fun bit. I never reply 'Beans on toast', or 'Sausage-n-mash', but attempt to make whatever we're having sound as exotic and appetising as possible.

Take last night for example. Following her standard question, I replied "Tonight we are visiting the Mediterranean shores of Italy; somewhere just south of Rome, where the local gaily dressed fishermen are singing traditional old sea shanties as they land their night's catch. Meanwhile, on the fertile inland wheat-growing plains, grand-mamas are busily hand-forging the finest flour into a delicious accompaniment. All to be served with a very pleasant, expertly matured, Merlot from the Languedoc".

"No dear, we're having spaghetti with a delicious creamy seafood sauce". I reply grumpily.

This happens every single day in this house. I'm not kidding, it really does!

I was sent this picture yesterday, as a birthday card. I hadn't seen it for decades.

How young I look, and how neat-n-tidy; not at all like me these days. And where's that scruffy beard?

Yes folks, I was once almost respectable looking. I'm not sure quite what exercise I was setting myself, but I still have the tie.


Today is my birthday; when I look at the new number, it makes me feel very, very, old. I'm not sure if I'll do anything special later, I may just try to forget about it. HAPPY BIRTHDAY to me!

Perhaps I'll treat Lady Magnon to Steak, Chips, and a bottle of Pécharmant, at my favourite local restaurant. I'll have to celebrate somehow. 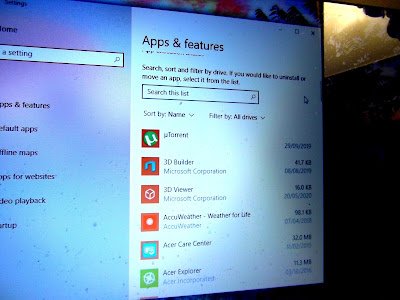 Over the past couple of weeks, my laptop had become unbelievably slow; it was almost like going back to the days of 'Dial-up'. Lady M (who had become increasingly bored with my constant moaning) suggested that it was because so many holidaymakers had come here with their laptops, iPads, etc, and that as we are at the end of the line, it was inevitable.

I was neither convinced, nor happy.

Rather than call on my tech-wizard friend Craig, I thought I'd throw caution to the winds and have a look 'inside' by myself.

I found all sorts of rubbish, which I uninstalled, and 'Lappy' is now back to 'normal' speed.

For reference this is what I did: First I opened 'Settings', then clicked on 'Apps, uninstall etc', then searched through all the unwanted stuff that seems to have installed automatically over the past 6 months or so. Some of them, such as 'Candy Crush Something' contained hundreds of Mb's and were blocking the system. I cleared out loads of stuff. You simply click on the App, then click on uninstall.

Of course you can't just delete any old thing, just stuff that you know isn't essential to the running of your machine. If you can't differentiate, it's probably best to have someone with you who knows what's what.

Now my laptop is a pleasure to use again. I had become so frustrated, that I'd seriously considered buying a whole new machine, so I've saved myself a few hundred quid!

It's probably not a bad idea to see what's lurking, even if your machine is working OK. 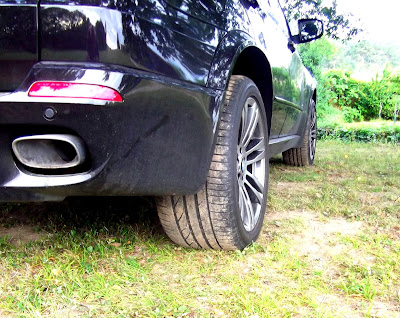 I'm not at all a 'petrol head', but I was shocked to see the size of the tyres on my son Kimbo's car. They are massive.

Having just last week changed all four tyres on my own car (The Compact Royce), I thought I'd have a butchers' online to see how much HIS would cost. 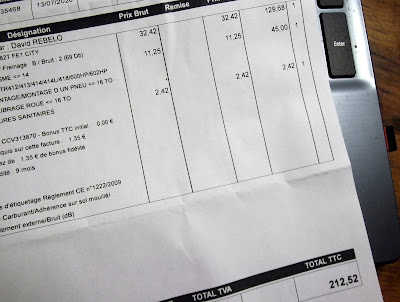 I am perfectly aware that the two cars hardly compare, but over a 'grand' just to replace the tyres does seem a tad excessive. I hope he looks after them!

Whose chubby little fingers are these?

2. His Mum is very famous too.

4. His wife's son writes about cookery.

5. He is a great advocate of bio culture.

6. His favourite meat is Welsh Lamb.

7. He insists on having his morning eggs boiled for exactly 7 minutes.

8. He runs his cars on Bio-Fuels made from English wine.

9. He has two well known sons.

10. And lastly, he has fingers that look like a pound of cheap Pork Sausages.