How life has changed over in France. This photo represents perfectly how things used to be.
I don't recall the occasion of this photo, but I expect it was taken on the evening of a Grape Harvest. Once the grapes were pressed, and the juice poured into the huge oak vats, we would all gather for a 'thank you meal' with the farmer involved. We later moved from farm to farm to do the same.
Monsieur and Madame D (lower left) were our next door neighbours. She was a wonderful cook, and would serve delicious eight or nine course meals at the drop of a hat. Most of what she served had been produced on the farm, including the previous year's wine. 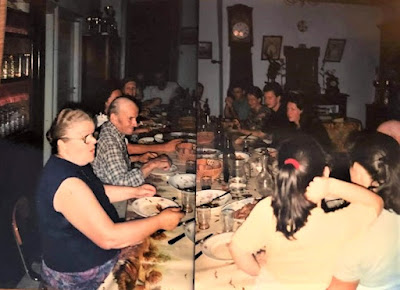 Sadly this way of life has now gone (along with M and Mme D). Their daughter and son-in-law now farm the land, and things couldn't be more different.
There are no longer any vines, no chickens, no ducks, and no pigs. They still grow plenty of fruit and vegs, but the EU has changed just about everything else. This particular family still have a very small herd of beef cattle, but they are the only family nearby that does; and I can't see it lasting.
People were happy. They worked hard, and took pride in what they did. Their lives were ruled by tradition, and that tradition has now faded. No longer do farmers wives produce their own foie gras, confit, and paté; all that is confined to history. And now that farmers spend a much more leisurely existence, their children leave for the big cities. No doubt the farms will eventually be sold to Dutch horse owners. I can't see them being farmed any more (not for a while anyway).
It was such a lovely way of life. People worked hard, but they enjoyed what they were doing. So much has changed during the past 48 years that we spent in France. A life-style that will never now return.
Posted by Cro Magnon at 04:47