Things; in no particular order.

Firstly I had a very pleasant surprise yesterday. I received a really lovely card from the mother of the girl who's bag I found a couple of days ago. Wasn't that nice of her; and totally unexpected.
At long last we've had some reasonably serious rain. We also had two nights of gentle thunder and lightning, and everything is looking refreshed.
It is actually raining as I write, so I've donned my new Barbour and dinky matching rain hat, and ventured out down to Boots for my prescription. I'm pleased to say that the new Barbour was put to task, and is extremely efficient, which is more than I can say for Boots. If you are a shareholder of the USA Co that is buying Boots; sell now.
My oldest (Kimbo) is in Venice. He's having fun touring around Italy, it's his favourite country and he loves the food. He deserves a break; he works too hard. 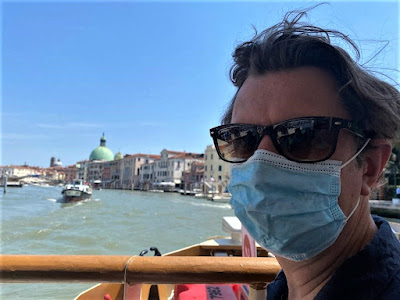 Yesterday I picked-up my car from the 'garage'. They put a new clutch in for me, which took about four times as long as promised.
My mechanic in France, the wonderful Monsieur B, is one of those old fashioned types who seems to live in a permanent mess, but knows exactly where everything is. His workshop is about twice the size of the one below, but he never has more than two cars in it at any time.
What you can't see in the photo of my garage, below, was another four cars round to the left that were literally stuffed-in nose to tail, and being worked on. He was working on EIGHT cars. This guy seriously requires bigger premises. 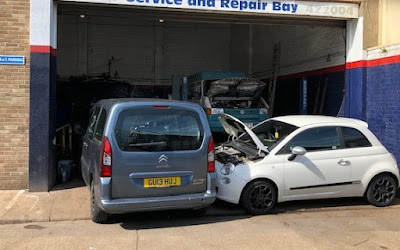 Anyway, all is now done. The Compact Royce no longer makes clanking noises in first and reverse, and changing gear has become an altogether different experience.

The garage boss previously owned a home in France, and wanted to tell me all about it. I think of myself as a reasonably good listener, but I have my limits. He went on and on and on and on.......

Our heating engineer has just been to make sure our boiler is up to scratch. He says it is.

It's been an extremely busy couple of days.