I'm afraid this photo isn't very clear, but I hope you get the idea.
Yesterday our 'People's Republic of Brighton Council' decided that the pavements on both sides of the road, just behind our house, should be lowered to road level in order to make life easier for Mums with pushchairs and the disabled in wheelchairs.
It used to be said that the likes of Mr Sainsbury, and Messrs Marks and Spencer, would stand on the street to watch where people crossed the road. When they had pinpointed where people mostly crossed, they would then build their stores. Sounds sensible to me. 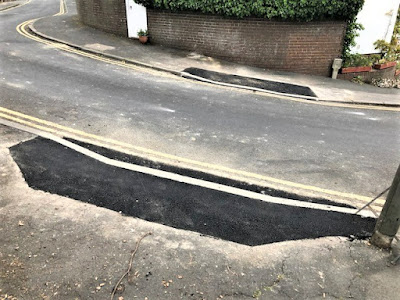 I think I can honestly say that I've never seen anyone cross the road where these two lowered pavements are. Nor have I seen anyone struggling to cross with a pushchair. People who continue round to the left stay on the left hand side of the road, and those who head downhill to the right do the same. There is absolutely no reason to cross where this new crossing has been positioned.
One really wonders who makes the decisions for such projects. I'm sure some dungaree wearing, green party, feminist, do-gooder, will be feeling very proud of herself for having won some non-existent battle on behalf of the local yummy-mummies, but as far as everyone else is concerned it's a total waste of money. Just a few yards up the road there are potholes that have been waiting for years to be filled (below), but the 'crossing' apparently had priority. 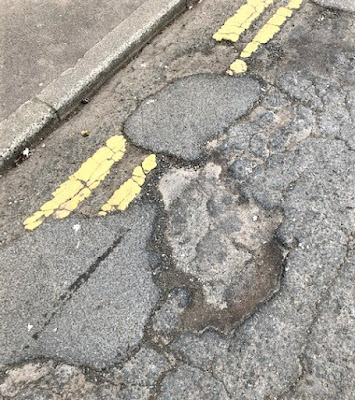 It's great spending money when it's not your own.
Posted by Cro Magnon at 14:00