What were they thinking!

When I was still up at my senior school, I worked (when I had the time) with Sir Harry Legge-Bourke who was our local MP.

Sir Harry was a good tried-n-tested politician who worked tirelessly for his constituents, but was ousted when a 'CELEBRITY' candidate stood against him. Clement Freud (a radio personality) defeated him in 1973. The incoming Liberal Democrat MP (Freud) did little for his constituents or for his country. He soon faded into obscurity (politically), and his constituents were left without proper representation.

What were those voters thinking! 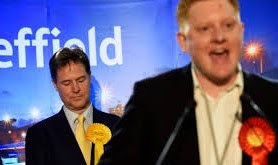 In more recent times, the one-time-leader of the Lib-Dems, Nick Clegg (left above), who was MP for Sheffield Hallam) was ousted by loud-mouth Labour candidate, 41 year old Corbyn supporter, Jared O'Mara (right above).

O'Mara hardly showed-up at Westminster (he quit after 2 years), but managed to claim a very healthy sum in 'expenses' whilst there. He was caught, and is now up before the Judge on 8 counts of fraud; the money allegedly went to pay for his copious Cocaine habit. Strange that the BBC has failed to highlight this in the same way that they harp-on about far less interesting Tory stories. The short-term Labour MP created a fictitious charity called 'Confident about Autism SY', through which he claimed about £30,000 to fund his well-known drug habit. In court the prosecutor said......

"O’Mara had used fraudulently claimed money to enable friends to hang around his flat, getting drunk and snorting lines of coke, all paid for by you, ladies and gentlemen, the hardworking and honest taxpaying public”.

The above comes from The Guardian, and not The Daily Mail, as some might suggest.

I was never a supporter of the Lib-Dems, but I think Nick Clegg was a well-meaning (if slightly ineffective) politician, but why he should have been replaced by someone of O'Mara's ilk is a total mystery. Given the choice; who would YOU have voted for?

Many will remember that Clegg's major 'flagship' policy was to put a limit on University fees. As soon as he became Deputy Prime Minister under David Cameron's coalition government, he immediately abandoned the policy. A massive U-Turn which made him very unpopular with younger voters.

But even with that in mind, what on earth were the voters of Sheffield thinking! O'Mara's atrocious behaviour makes Boris's al fresco No 10 meeting seem almost innocent.

Be warned, these things could happen again.

We have been eating Hot X Buns since we returned last September. Like so many things, they have lost their seasonal exclusivity, and are now sold all year round. I'm not complaining!
To me they go along with Crumpets as something to enjoy with a cup of Lapsang through the cooler afternoons.
Until this year, Hot X Buns have always been quite plain, but these below are quite different.
They are part of Sainsbury's 'Taste the Difference' range of foods, and in this particular case, you really can.
As you can see by the label (I'm afraid we'd eaten all the buns) they contain Cranberries, Blueberries, and Lingonberries. They have a beautiful fruity perfume about them. 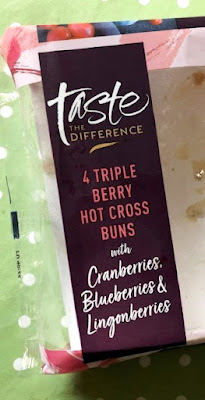 These are SO MUCH BETTER than the usual Hot X Buns we are used to. I can recommend them without hesitation. They are a total delight for anyone who both visits Sainsbury's, and loves these wonderful Easter treats.
N.B. I'm not on commission, but I should be!
Posted by Cro Magnon at 05:41 22 comments:

The photo below shows Princess Anne with two of her Bull Terriers; all teeth and muscle.
Not all 'doggies' are sweet natured, some are bred to be aggressive. Pitbulls, Bull Terriers, and various cross breeds are to be approached with great caution.
Princess Anne has three Bull Terriers. One of them (Dotty) savaged one of The Queen's Corgis (Pharos) so severely that it needed to be put down. They have also bitten innocent children, in fact I believe that Anne was the first 'Royal' to be prosecuted after such an attack, and was fined £500. I also believe that she paid hefty compensation to the child. 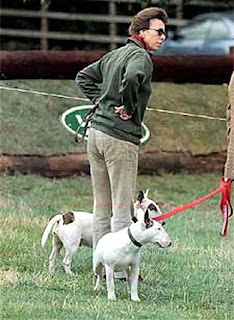 On Boxing Day last year, another of her dogs attacked a Gun dog during a Pheasant Shoot at Sandringham. It was said at the time that there was 'a lot of blood and screaming'.
Anne's Housemaid, Ruby Brooker, was also bitten on her knee at Anne's own home. 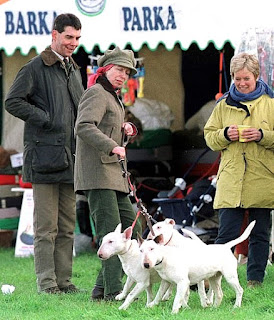 There are only four banned breeds of dogs in the UK; the Pitbull, and three other breeds named after Japan, Argentina, and Brazil. Sadly this doesn't mean that if you cross a Pitbull with a Bull Terrier that it too will be banned; even though it would probably end-up being just as aggressive.
The old adage of 'He wouldn't hurt a fly' doesn't apply to certain breeds of dogs. They can be all sweetness and light for many years, then for no apparent reason they can suddenly turn into a savage killer. Their natural inbuilt aggressive nature can be perfectly hidden. We do seem to be hearing more often of dog attack fatalities, I have heard of two more just this week, which I suppose is proof that too many of these breeds are still around.
It's not my business to tell Princess Anne what dogs she should or shouldn't own, but her three Bull Terriers have proved themselves to be extremely dangerous and troublesome. Maybe it would take one of them to bite HER before she thinks again.
I'm sure she loves them dearly, and they her, but I do think she should lead by example. Keep them at home in a secure area.
Any dog can become vicious if provoked, but most are less likely to than Anne's dogs. I don't think it's a good idea either, having all three on one lead. It makes them act as a pack.
Posted by Cro Magnon at 05:55 23 comments:

This is more for the amusement of people outside of the UK, for whom it might prove a revelation.

In parts of Britain they use totally different words for the numbers 1 to 20. Not for when buying Bananas, but for when counting Sheep. This ancient Brythonic Celtic language is apparently also used in Knitting.

The examples below come from six different parts of Yorkshire. As a boy I can remember learning Yan Tam Eddera Teddera Pit, which was probably something I'd gleaned from the radio. I'm sure we didn't use the words in Surrey.

Now get learning those numbers, I shall be asking questions later! 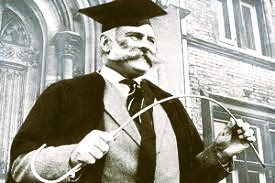 I'm not a fan of the radical Trades Unions, or of striking. I've seen what they achieve, and in the long term the strikers never win. The only one's to gain are the Union Leaders.

When I was up at school it was unthinkable that my Teachers would have gone on strike.

Later when I myself was a Teacher, I would never, ever, have considered going on strike.

These days things are very different. In the UK's state schools most Teachers are members of some neo-Marxist Union (NUT), and when they order 'everybody out'; they blindly do what they're told, or risk being called 'scabs'. Sadly they are also teaching the children that all of this is OK.

Of course there are plenty of schools in the UK where the Teachers will NOT be striking today, and where the children's education and welfare is of paramount importance.

It is not surprising that Starmer & Co want to abolish such schools, as they keep to high standards; which include not walking out on their pupils.

Along with the Teachers, almost all other left-wing unions will be calling their members out on strike today. If this is their way of trying to get the country's economy back on track; I'm afraid it won't.

It's not only the fault of Covid and Putin's war that's causing our economic problems, it's all these wretched strikes as well.

p.s. I should add that according to the OECD (Organisation for Economic Co-operation and Development) UK Teachers are better paid and work less hours than most European countries.

“Walk Between the Raindrops”

I just came across this photo, and it brought back some very good memories.
I'm not someone who regularly buys bespoke. I have been known to use a tailor, and a shirtmaker, but other than that, hardly anything.
However, shortly into my French adventure I came across the wonderful rustic dark green glazed pottery of Biot, in Provence.
I had begun to collect a few antique (or old) pieces, then had the wonderful idea of ordering some Dinner Plates. I asked for their catalogue, which arrived almost the following day. It was illustrated with drawings rather than photos, and all the prices were hand written in ink. It must have taken hours for a 'work experience' person to prepare.
I found what I wanted, and sent off my order. 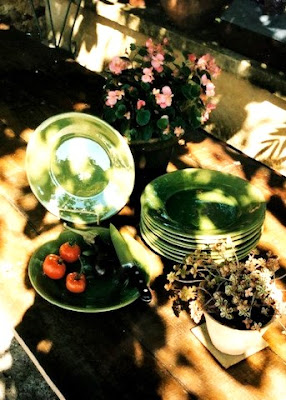 It took quite a while for the plates to arrive, and I remember well unpacking them from all the straw-like packing material. I had ordered 10 plates, and they all arrived unbroken or damaged. I really should have ordered 10 small side-plates at the same time; but no.
The above photo was taken just after I'd unpacked them. I was like a kid in a sweet shop; I was so excited. 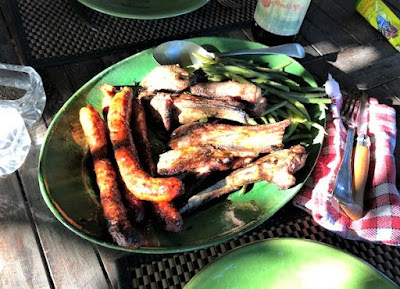 Here is an antique (old) oval Biot plate in action, with the dinner plates also in use. They really do make food more appetising.
Our potter in Biot is M Augé-Laribé, and the name of the pottery is La Poterie Provençale.
If you're down that way you should pop in; just say Cro sent you!