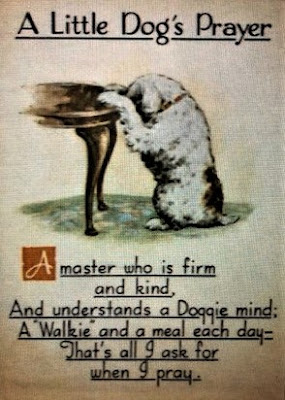 Our Lab' of recent times was named Montague-Macbeth Magnon; but known to all as Monty. Our Border Collie/Black Lab' cross was called Bok, although I think we'd misheard 'Pok' from the previous owners.

Our present ball of mischief is called Billy, regardless of him having originally been given the very silly name of Badger. I'm not sure who gave him this name but he had to be registered quickly, and somehow the name Badger slipped through. It still says Badger on his papers, passport, etc, but I soon changed it to a much more acceptable Billy.

Of course to a dog his name simply means 'come here'. All dogs hear their names as meaning 'come here'; whether they take any notice of it is another matter.

I don't suppose Dogs really mind what names we give them, as they only mean 'come here' to them anyway, but I do pity Dogs who are expected to answer to Twickywickyboo or Princess Koochy-Eyes. It can do nothing for their self-esteem.

The only Dogs I avoid are those called Tyson, Thunder, or I'll tear your throat out (pronounced 'I-frowowt'. They are given such names to reflect their reputations. Those reputations tell me to keep clear.

Preferably Dogs names should be of one or two syllables only. Long names are pointless. A short sharp name is far more likely to get the 'come here' response we desire, rather than some silly name that the poor thing might pretend has nothing to do with them at all.

My two illustrations have nothing to do with Dogs names, but I thought you might like their shameless sentimentality. 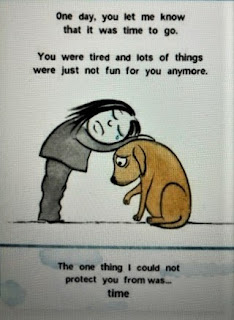