Her Majesty is much in the news these days as we prepare to celebrate her 70th year on the throne.
Here she is at my old school, with the then Headmaster Hubert Ward, celebrating its 1,000th anniversary. The magazine is dated 1974, but our Millennial year was actually in 1970; the school having been 'officially' founded in 970. Maybe they used the photo again for the 1974 magazine, but I can't think why.
I wasn't there (I left in '64), but everyone said how wonderfully happy she'd looked. I think you can see it in the photo. 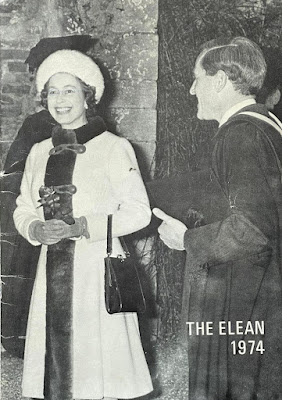 H M The Queen is now 96, and her age is sadly preventing her from attending too many regular duties; she even missed Tuesday's State Opening of Parliament.
Hers is a remarkable record, and one of which we should all be extremely proud. It's just a shame that certain younger members of her family are incapable of behaving themselves; especially their unruly wives.
Gawd bless yer M'aam.
Posted by Cro Magnon at 04:26