Dear Jacob (as in Rees-Mogg; minister for Brexit)

I have a cunning plan. Why not take the lead and return unilaterally to how things were for travelling EU members prior to Brexit.

Open the UK borders, allow EU citizens to stay for as long as they like, and even allow their pets to step on British soil without all those nonsensical forms and unnecessary jabs they presently require. If they are EU Schengen area nationals; let them roam.

Now that Portugal has fast-tracked British holidaymakers (a clever ploy to get those UK holiday £'s into Portuguese pockets), if the UK was to show a similarly liberal attitude towards workers and holidaymakers coming from mainland Europe, it could only lead to Brussels eventually doing the same, and we could all return to the good-ole-easy-travel-days of The Common Market. Relaxing the regulations could only bring more Euros into Britain; which can't be a bad thing.

If Brussels DIDN'T follow suit, it would only show them to be the pompous, 'foot-stamping', hypocritical, angry people that they are! 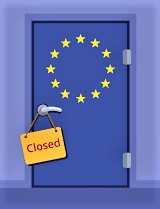 As I'm sure you are aware, those of us who own homes on mainland Europe are no longer allowed to live in those homes for more than 3 months at a time (unless we buy an extension visa, or become foreign residents), but we still have to pay all the annual expenses; plus extra gardening costs to look after our gardens orchards, etc. I have owned homes in France for nearly 50 years, and this is not what I expected of Brexit.

I'm certainly NOT prepared to become one of Macron's Citoyens; although it must be said that many ex-pats seem to have little allegiance to Britain (or have homes in the UK), and would sign away their souls for their love of Brussels.

Please note, Jacob, that although we agreed with much of the Brexit reasoning, we both voted against for very obvious personal reasons.

In general, Brexit has been very good for the UK, our economy is outdoing that of the EU and most of the G7. But on a human level it has made things very difficult for movement across The Channel. You, Jacob, have the opportunity to unilaterally change all that; and in doing so, to force the hands of those big-wigs in Brussels.

Act now; return THEIR FREEDOM, and maybe ours would soon follow suit.

Many thanks in advance; Cro.