Who is Lee Anderson, and why do people hate him? 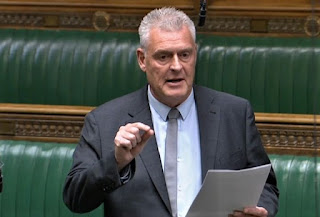 Anderson is a British MP. He was a lifelong Socialist, but switched to the Tories about 4 years ago. Why he is hated is not uncommon these days in the UK; he dared to tell the truth!
He has an interesting history. His father was a coal miner, as was he. He was a Labour councillor for many years, and has worked with the homeless. In other words he knows a bit about life. He's not your average Eton Oxford titled toff which is how The Left like to brand all Tory politicians. He's a 'man of the people' who knows where people's interests lie.
One of his favourite causes is a Food Bank in his Ashfield constituency, which, as well as distributing food, teaches people to prepare very cheap and nutritious meals for their families. He recently claimed that people could prepare good meals for 30p, and of course the 'poverty police' went bananas, and called him every nasty name known to mankind.
His claim is that it's all about education, not unlike the 'give a man a fish and he'll eat for a day, but teach him to catch fish and he'll eat for ever'. And, of course, he's absolutely right. To make your own Pizza at home might cost anything from £1 for four people, but to buy it through a moped delivery service will cost from £15 upwards.
I suspect that many of the woke dungaree wearing 'poverty police' want 'poverty' to continue. It not only supplies them with well paid social service jobs, but it also serves a good political purpose. To suggest that people could educate themselves out of poverty is obviously going to annoy the hell out of them.
There will always be people who cannot manage their finances, and I hope there will always be those who try to help them, but for heaven's sake lets not shoot the messenger.
Posted by Cro Magnon at 04:19