The long man of Wilmington. 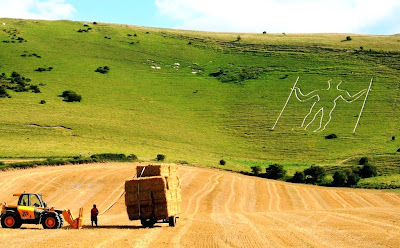 The 'Long Man' is a figure carved into the chalk downs at Wilmington; a small village near Lewes in the wonderful county of East Sussex in the south of England. I've painted it several times.

Its origins are unknown, but archaeologists believe it to date from the sixteenth century. The man himself measures 70 metres tall and holds two long poles; one in each hand. Theories abound as to the significance of the two poles, one of the more rational was recently explained by Tom Stephenson in his posting entitled The Hog's Back (Tuesday 25th May). Any further theories will be gratefully accepted.

There are plenty of these hill-side chalk pictures around England. Two of the most notable being the White Horse at Uffington in Oxfordshire (white horses are the most popular), and the Cerne Abbas Giant in Dorset (famous for childless couples spending the night on a certain part of his anatomy.... Look it up on Wiki).

But for a Sussex/Surrey chap like myself, nothing beats The Long Man at Wilmington. It's a place of mystery, ancestry, and pilgrimage.