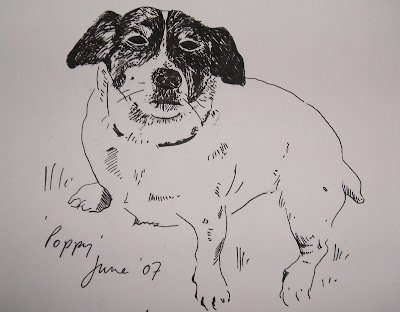 Many friends will remember that my friend Terry's dog 'Molly' died recently.

The dog above 'Poppy' belonged to my next door neighbours. Not long after I did this drawing she was run over, in our nearby town, as her owners dropped their daughter off at school. Unfortunately 'Poppy' jumped from the car and was hit by an oncoming vehicle.

A few days ago I learned that another friend's dog 'Freddie' was killed in the same nearby town by another motorist. In this case he was just wandering around; as dogs do, and was hit.

I suppose it's not the fault of the motorist if a dog runs in front of his or her car. But the tragic results are upsetting for everyone; owner and driver alike. Maybe all dogs should be kept on leads whilst in town.

We seem to be losing a lot of dogs recently.