The Sunday Story: May Day Frolics. 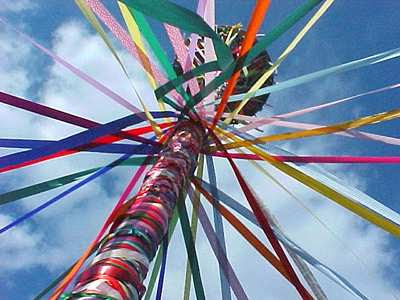 I re-print this shortened tale from my 2008 blog (Périgordlife/Je t'adore 24).


37 years ago, at approximately 2am on May 1st 1973, we were rudely awoken by the sound of a thousand hooligans blowing trumpets, beating drums, and singing 'God save the Queen' outside our bedroom window. We trembled in our night-gowns for about half an hour or so, until whatever mob was out there moved away. Later that morning I managed to ask my new neighbour, Madame D (in my then rudimentary French), what the hell had been going on.

It seems that since time began, the spotty youths of our village have assembled, annually, at a pre-ordained location on the last evening of April, swallowed considerably more than was good for them, then set off in the early hours of May 1st on an inebriated, noisy, egg and alcohol search; taking in as many homes within the commune as the hours of darkness would allow.

Outside each house they would make an un-earthly racket until some poor soul would let them in, offer gifts of eggs, and ply them with even more wine. Some of the kindlier housewives would even cook them omelettes; possibly in the hope that a full stomach might soak up some of the booze and keep them on their feet until dawn.

Drunken youths? Yes! But pleasantly boisterous and considerate. No smashing of windows, no destruction of flower beds, and no urinating in the dog's water bowl. These 'children of the plough' were even thoughtful enough, on our first experience of these May Day Frolics, to sing our National Anthem (to which they knew ALL the words), then depart in the knowledge that there must have been a house-full of terrified and/or bemused foreigners quaking in their well-barricaded beds.

Sadly this tradition is all but over. The kids just aren't there. Even back in 1973, those 'thousand trumpet-tongued hooligans' were, to be perfectly honest, just a dozen pleasant fourteen-year-olds.

In some ways I don't miss it. Being woken by a bunch of kids in the dead of night is no fun. But as long as they make a detour away from 'chez nous'.....