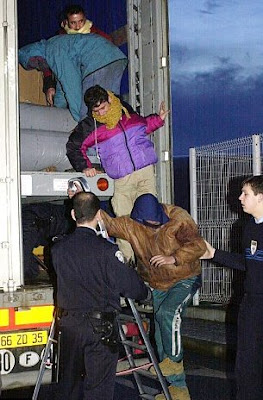 A few years ago I'd driven non-stop up through France and was feeling pretty tired; it'd been a long day. I was waiting for the ferry, in a shortish queue, at the port of Dieppe (Northern France). It was late at night but the whole port was well lit. In front of me was a huge UK registered lorry, like me, on its way back to England.

The port was reasonably quiet; there's always a stark eeriness about these places at night. Suddenly some 'officials' began to poke long metal rods into the back of the lorry in front; then having registered some anomoly, opened the back to reveal about a dozen young men who jumped out and ran off. One jumped from a great height, fell awkwardly, broke his leg, and had to be carried off.

The whole scenario seemed unreal, but for the French officials, and the English driver, this was just another everyday occurance. For me, it had been quite a dramatic experience; for them it was just normality. The driver even said to me "They'll be back, it happens every night".

Stories about illegal immigrants, and their bizarre antics, abound. But to witness it quite so closely was something of a shock; at first I didn't even realise what was happening. These young men (they're always young men) have nothing to lose, and everything to gain. They are prepared to do the unimaginable to get access to the UK.

I don't see any easy answer to this problem. Every bar-room politician has his own solution, but I've not yet heard of one that is fool-proof. It's a very sad situation.