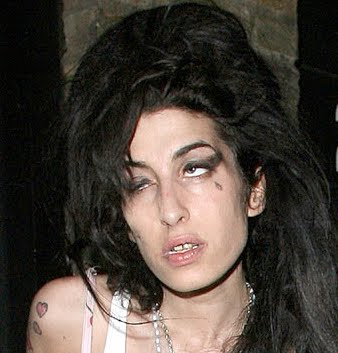 I first saw Amy Winehouse performing on one of Jools Holland's New year's eve 'Hootenanny' programmes; it was probably 5 or 6 years ago.

I was totally bowled-over by her performance. It was the first time I'd seen her singing live (even on TV), and her two songs were terrific. She was basically sober, coherent, and MAGICAL.

OK, most singers probably have a drink or two before going on stage, but just look at what being a total smack-head does to you. Take a look at the clip below from 2008. If it doesn't want to make you take her in charge, I don't know what would. A huge talent gone to waste? I hope not; lets 'pray' she manages to sort herself out!

http://www.youtube.com/watch?v=Q5jEU9hatcI
Posted by Cro Magnon at 05:24