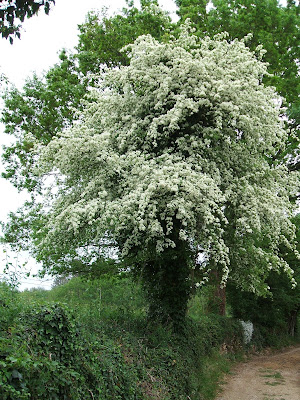 I don't know of any other tree that changes it's name for just one month of the year. But the Hawthorn becomes the May tree in May, then reverts to being a Hawthorn again for another eleven months.

Everyone (probably) knows the old adage 'Ne'er cast a clout 'till May is out'. Many take it to mean that one shouldn't begin to pack away one's wooly vests until THE END of May.

In fact it refers to May FLOWER. So, keep those 'thermals' on until the May FLOWER is out. As above for the last week, in our drive.

Nota Bene: There once was a ship named 'The Mayflower'. Back in 1620 a bunch of our lads sailed from Plymouth to settle in some barren land across the pond. No-one knows what happened to them, but no doubt they landed somewhere and made a reasonable go of it. Maybe we should send out a search-party; their descendants (if there are any) are probably trying to get back!