Interior. That other wall. 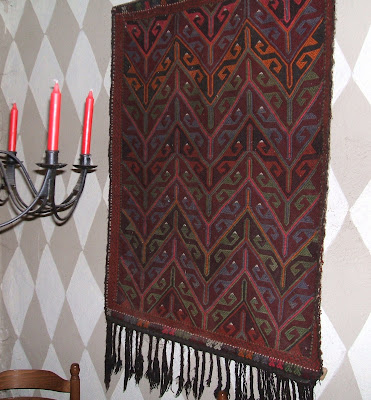 My late father-in-law worked abroad all his life. When he retired, he never really settled. The world is filled with such people.

He never re-acclimatised to the English winters and would up-sticks pre-Christmas; only returning to Blighty in late spring.

He over-wintered in Spain (he spoke Spanish), in Morocco (he spoke French), and in Turkey (he spoke Turkish). He also spent time in Syria, and in Lebanon.

On one such winter trek (possibly around 1978), he was crossing some desolate mountain range between Syria and Lebanon when, miles from anywhere, he came across a tiny shepherd's cottage set back from the track. Outside the cottage was hanging what you see above. A hand spun, hand dyed, and hand woven, rug. It measures 1 metre wide, by 1 metre 30 long (without the tassles). On the question of knots per square 'whatever', it is pretty tightly woven.

My father-in-law asked the lady of the house if it was for sale, and predictably the answer was yes. She explained that she made two such rugs each year, and the money she earned was for HER use only. The asking price for her 6 months work was £5. This poor woman (presumably having sold both rugs) had just £10 to spend on herself each year.