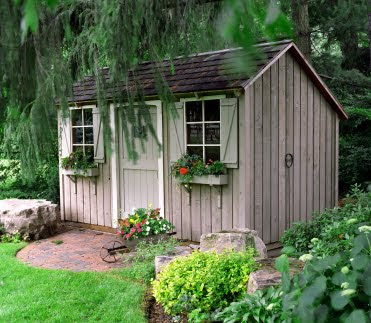 I was reminded of this story, having read a posting by Tom Stephenson.

I had a second-cousin (Actually, I think our relationship was much more distant than that, but...) who was a graphic designer for the Church of England (a black sheep, obviously). In roughly 1969/1970 he bought a very beautiful, but run-down, house, just off the Hog's Back between Farnham and Guildford, in England's leafy county of Surrey.

Having restored the house to a livable standard, he moved in, complete with wife and two small children.

Spring approached, and Mrs second-cousin decided that the impenetrable garden needed some serious work, so she engaged a local firm of slashers and burners. After several days work a path was opened to the bottom of the extensive garden where they found a small rickety shed (not at all like the one above). They had not previously known that the shed existed.

Mrs second-cousin saw at once that a well trodden path went from the shed to a hole in the overgrown hedge; someone had definitely been going in and out.

She pushed open the door to find an elderly tramp installed, complete with makeshift bed, chair, table, and camping stove. I imagine some short conversation took place, then she left him in peace.

The tramp, let's call him Jim, had been living in the abandoned shed for years, and my second-cousins had no heart to evict him. He soon became 'Uncle Jim', and even volunteered to do odd jobs for them in the garden.

I only visited this distant cousin once, and by this time 'Uncle Jim' was actually living in the house with the family. He was smartly dressed, articulate, and, had become a 'normal' member of society.

Many would have turfed him out of the shed at once, but these kind people had slowly re-integrated him into a more comfortable way of life. And they'd left the shed exactly as it had been found; just in case....