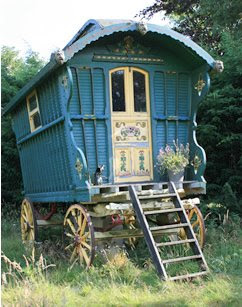 I wonder how many people know this old 'hand-clapping' rhyme. I used to play this at my mother's knee.

My mother said
I never should
play with the gypsies
in the wood.

If I did
she would say
naughty boy
to disobey.

I've had an interesting relationship with Gypsies, and their wagons, throughout my life.

Before I was born, my mother, and her best friend Pud Cumpsty, together bought an old Gypsy wagon that they placed in a spectacular Shropshire location, overlooking the rolling Welsh hills. They spent their weekends and holidays there; no doubt getting up to all sorts of mischief.

Several years later, along comes the young Cro, who, at the age of about 3, was sent to his very first 'school'. This was run by an 18 year-old girl, in an old Reading Wagon (somewhat like the photo) which was parked in some woods a few miles from our village (Lingfield in Surrey). We played with Plastercine, and listened to stories. It was pure MAGIC.

In the village itself lived a self-styled 'King of the Gypsies'; a certain Nelson Smith. Nelson was a scrap dealer, he drove an old Rolls Royce, and lived in a Reading Wagon. When he died (I was about 8) he was cremated inside his wagon in a field on the outskirts of the village. Literally thousands of gypsies turned up to witness the event, and wagons were parked just about everywhere. I remember one Gypsy man giving me half-a-crown to run to the village to buy a bag of pears. I returned some 25 minutes later (I think he was surprised to see me) and he gave me sixpence for my trouble. We had a traditional wheelwright in Lingfield, and I think it was on account of this that there were so many beautiful wagons in the area; that and the availability of fruit and hop picking in summer/autumn.

I can't say that I've ever got to know any Gypsies particularly well, but our paths have often crossed, and I've always stopped to chat; often handing over some traditional offering on parting.

Then in aprox' 1978, some friends turned up at our first farmhouse here in France, in a canvas-covered, round-topped, Irish wagon; complete with dogs, chickens, and their faithful ex-London-rag-n-bone-man's Welsh Cob called Joe. At 15kms per day, it took nearly two months to complete the trip down from Calais. The brave couple were both teachers from London; she being the niece of Anthony Wedgewood-Benn. After staying for about a month, they continued their trip to France's south coast, where I believe they sold the whole caboodle.

We recently tried to buy an old wagon to use as a spare room, but the owner, for some obscure reason, prefered to let it rot. What a pity.

p.s. If anyone from Lingfield happens to be reading this; the 'school' wagon was parked in the woods by the side of Hobbs Barracks in Newchapel. Any info' about the girl who ran it would be extremely well received.