Warning: It's His Eminence 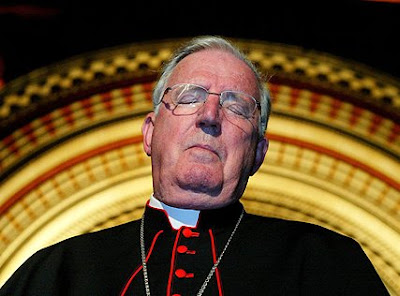 I know. I promised NOT to continue my Catholic Church hierarchy bashing, but now that almost every small-town media hack has jumped on my band-wagon, I'm going to return to my 'Early December' posting in the 'Périgord life/Je t'adore 24' blog (now defunct).

The charming bloke above was Pope Benny's man in the UK. He was The Archbishop of Westminster; the nearest thing to being a quasi 'Pope of all England'.

His name is Cormac Murphy-O'Connor, and prior to being the UK's Top-Cat (holic), he was the Bishop of Arundel & Brighton (1977-2000). During this time he 'shuffled' one of his very worst paedophiles (a certain Michael Hill of Heathfield, E Sussex) to the post of chaplain at Gatwick Airport; no doubt having given him 'very strict instructions' to keep his hands out of small boys trousers.

Do we all think that Mr Hill then behaved himself? Did he hell! He was back at it almost instantly (and was eventually imprisoned).

So who is to blame? This is not the only case under Cormac's Arundel & Brighton tenure. He 'shuffled' errant priests like dog-eared cards in a dirty pack... So, should he not have reported Hill to the police?

As I wrote in my posting at the time..... "No longer should the title 'Catholic Priest' be a byword for impunity where paedophilia is concerned. Lock 'em up!"

We should never be fooled by fancy sounding titles and uniforms. These guys are the same as anyone else, and should be treated as such in the face of THE LAW.

POST SCRIPTUM: You will have noticed a certain lack of 'respect' in my writing. Respect has to be earned; not put on in the morning or delved out by mates in Rome. I make absolutely NO APOLOGIES. I have far more respect for the weekly audience members who, by putting their hard-earned money in the collection box, inadvertantly go to pay hush-money to the tens of thousand of abused children.