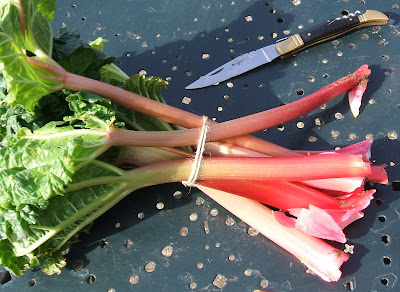 I don't normally touch my rhubarb until it's fully grown and asking to be picked.

This year, however, I spotted some early pink buds up at Haddock's, and decided to place some large black upturned tree-pots (giant flower-pots) over them, to encourage an early crop.

I know it's usually refered to as 'forced rhubarb', but personally I like to think of it as 'gently encouraged'.

As you can probably see, it was totally free from those annoying little slug bites, and was so tender that it cooked (in a splash of orange juice) in a matter of seconds.