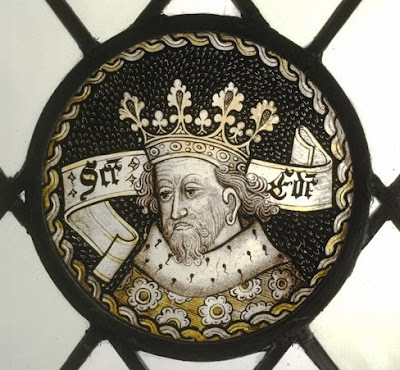 Saint Edmund is the true Patron Saint of England.

Very little is known of Edmund from then until his death, although it is thought that, at some time, he retreated on a year-long self-imposed incarceration period in Hunstanton, in order to learn the 'Psalter' by heart.

In 869 he was captured by the invading Danes, under the leadership of Ubbe Ragnarsson, who demanded that he denounce his religion.

Edmund refused, so the Danes tied him to a tree, whipped him, and shot at him with arrows. Still he refused to denounce his beliefs, so they decapitated him and threw his head into the woods. His body was eventually buried at Bury St Edmunds; as the name suggests.

The Middle Eastern St George is officially the Patron Saint of England; but why a Palestinian from Istanbul (who obviously lied about killing a dragon) should have been chosen for this role, I don't know. At least Saint Edmund lived in England; even if he too was not actually a native.

Perhaps the English should now revert to their true Patron Saint; Saint Edmund of East Anglia.