Straighten Up and Fly Right. 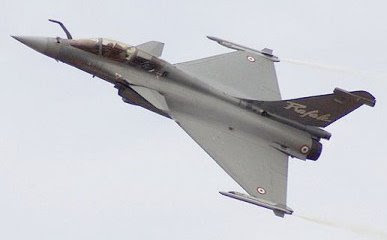 Above is a picture of the French fighter jet; the Rafale. Rafale translates as 'Gust' or 'Blast'; the word usually being associated with strong wind.

For some bloody reason, the French airforce have decided that my little village is a marker point for their hooligan trainee pilots to use as (a). A place where they can practice 'dog-fights'. (b). A quiet spot where they can break the sound-barrier without disturbing TOO many people. (c). The perfect location for playing 'Brush-the-Peasant's-Chimney-Pot'.

On occasions the noise is unbearable. I can hardly imagine what it must be like if they fired off a missile as well!

I'm now wondering if someone, at sometime, didn't strike a deal with the French airforce; in exchange for dosh, maybe? Otherwise I would have thought that our Mayor would, by now, have had words with them, and told them to eff-off elsewhere.

The title to this posting, 'Straighten Up and Fly Right', is from a song that was probably best interpreted by Nat King Cole or The Andrews Sisters. Both versions are well worth a listen.