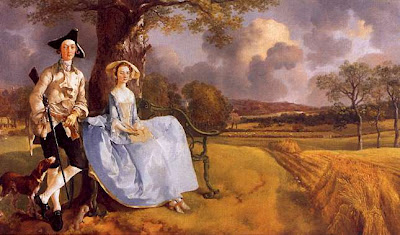 Following a recent posting by Tom Stephenson (http://tomstephenson.blogspot.com/), it made me think about different countries, and their ONE true ICONIC national painting. I would like to propose the following few; mostly pretty obvious.

For the Americans this must be Grant Wood's wonderful 1928 double-portrait of his sister and dentist (I think), called American Gothic.

For the Italians there is no question. It has to be Da Vinci's 1507 (?) painting of the Mona Lisa; probably one of the world's best known (and best loved) images.

For the Spanish there is the 1656 Velazquez portrait of the Infanta Margarita; usually known as Las Meninas. (This, Tom Stephenson called 'one of the greatest paintings ever')

For France, I will suggest Picasso's 1937 war epic, Guernica (even though Picasso was, of course, Spanish).

And for the English, (rather than going for the more obvious Constable or Turner) I offer Thomas Gainsborough's 1750 portrait of Mr and Mrs Andrews (above).

Gainsborough was still a very young man when he painted this luscious half portrait/half landscape. The picture demonstrates everything good about life in 18th century rural England. The proud and solid English Oak, the fertile land, and the young wealthy couple amid their extensive estate. This painting could almost replace The Union Flag.