It's that time of year. 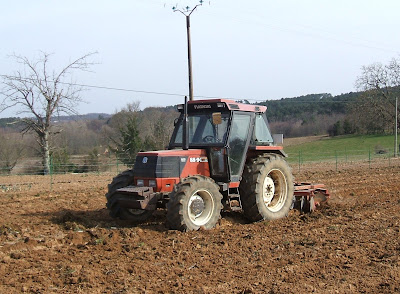 It's official. Spring has arrived.

I know this because my neighbour, Laurence (above), has been muck-spreading and disk-harrowing.

The field she is working on is about 100 metres behind the cottage. Usually, in May, it's sown with Maize. I didn't ask her what's going in this year, but I quite expect it to be Maize again.

With the fruit trees about to flower, it's that fingernail-biting, rabbit-foot-stroking, anxious time of year, when we dread FROST. Between now and 'The Ice Saints' (11th-14th May) any overnight temperature below about minus 8 C can wipe out a whole year's fruit crop (except the figs).

We're all now listening out for the cuckoo. He won't be long.

N.B. For those who are unaware, Laurence's father José recently had an accident which involved a chainsaw coming into contact with his right foot. So she has taken over many of the jobs that he would normally have done. I must add; she does a damned good job too.