The Sunday Story: The Ruin. 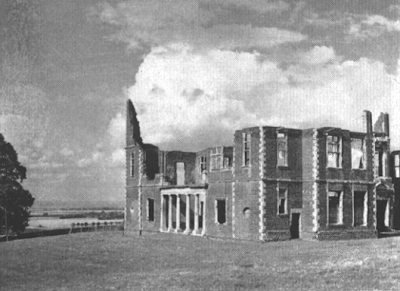 This is not the ruin of my story, but I offer the image here just to give you an idea of what I'm talking about. The location was very similar, but the mansion about which I'm writing was much more imposing.

In 1971 I was teaching at a well-known co-ed prep' school in Sussex. At weekends (if I was on duty) it was always my aim to find new and interesting things to occupy the children's spare time. One sunday I took a group of them for a long walk on The Sussex Downs, in search of an abandoned Georgian Mansion that I'd seen marked on the local Ordnance Survey Map.

The house was very overgrown but still mostly intact, with a row of classic stone pillars (as above) supporting a triangular tympanum that contained a heavily carved Coat of Arms. All was there other than parts of collapsed roof, even the old greenhouses, in the walled garden, contained much of their original glass. It was if the family had gone away for the weekend (a hundred years previously), and simply forgotten to return. The house even had its own private graveyard.

The children quite naturally loved the old place, and begged me to take them back again when the school's weekend rota next called for my presence.

It must have been about two months later when I returned to the location, and we were amazed to find that EVERYTHING HAD DISAPPEARED. Not a brick, not a window pane, not a broken tile remained. The landscape had been totally scraped bare.

Just as we were leaving I spotted a half covered stone beneath the grass. It was hemi-spherical and lightly carved on one side. It must have been some type of decorative finish on a garden ornament or such-like.

I still have the stone (below). I keep it as a reminder of how fleeting things can be. That beautiful old house, with all its in-built craftsmanship, had been callously taken away by the lorry-load probably to become hard-core for some tacky project elsewhere.

I do hope that some Architectural Salvage company kept the good bits. I'd hate to think that all was lost. At least I've still got my little bit. 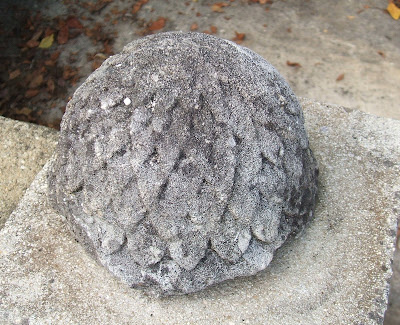