The Sunday Story: All Funerals are Equal, But Some are More Equal... 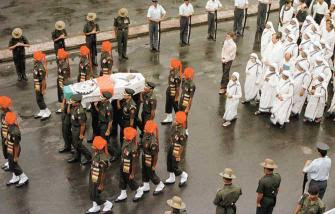 Back in September 1997 there were two rather exceptional funerals; one of which somewhat overshadowed the other.

Mother Teresa died exactly 13 years ago today. But she was unfortunate enough to die less than a week after a well known ex-member of the British royal family. And her funeral, which should have been an occasion for world-wide grief and mourning, was reduced to second billing.

I watched part of Mother Teresa's funeral service on TV, and was astounded to see the front seats all occupied by high-ranking military personel. Her fellow nuns all being confined to the hoi-polloi seats further back. Even as she was carried through the streets of Calcutta, guns and uniforms were never far from the scene; something I'm sure she would have abhored.

I really feel that Mother Teresa was deprived of her well-deserved, world-wide TV broadcast send-off. A remarkable woman who sacrificed her entire life for the benefit of others.

Diana Spencer certainly had admirers, but her life was of little consequence in comparison with that of Mother Teresa. Becoming a celebrity through marriage, is hardly comparible to becoming an unwilling celebrity through a whole life-time of hard work, struggle, and sacrifice. However, the fickle, gullible, and sentimental media saw things differently. Too late now!
Posted by Cro Magnon at 06:23