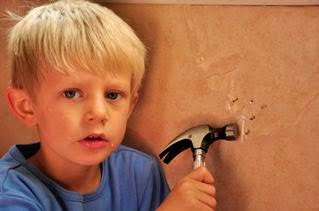 I'm pleased to say that my two UK-based grandsons have inherited something of their Grumpy's skills at DIY.

As happens so often in homes with small children, Ollie (the younger one) managed to release quite a large piece of wallpaper from its confines. But, as luck would have it, Harvey J was on hand with hammer and nails to put it back again.
A pretty neat job of 'invisible mending' I'd say! I could hardly have done better myself!
(I probably should explain that as I was mid-Skype to my son on saturday, HJ (above) came into view saying 'Ollie's torn the wallpaper, but it's OK, I've fixed it'. My son went to inspect; and the above is what he found!)
Posted by Cro Magnon at 06:38