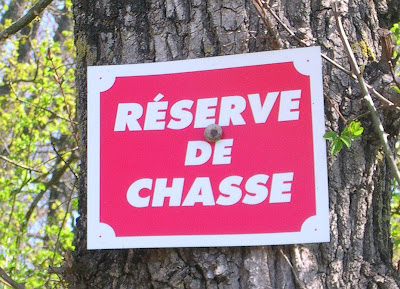 I was recently invited to dine with my friend José (he of the chainsaw massacre), and the subject of hunting was raised.


He kept on refering to St Hubert, which intrigued me. I've lived in my village for over half my life, so what he told me came as quite a surprise.


Unbeknown to me, it seems that there are three different hunting groups/clubs in the village, one of which is called 'Société St Hubert' (I believe that St Hubert is the patron saint of hunters). The other two roughly translate as 'The Mushroom gang', and 'The Chestnut boys'. Each group has its own territory, and I gather that there is some rivalry between the three of them, as to how many boar or deer each group bags each year.


At a forthcoming annual village bash, the St Hubert lads traditionally supply the boar meat for a rather special Paté de Sanglier. I really must get out more, there are things going on, on my very doorstep, that I know nothing about..
Posted by Cro Magnon at 06:04