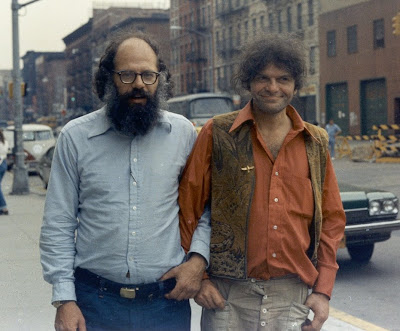 These two scallywags (along with Ferlinghetti) were the mother's-milk of poets to my generation. They took us by the hand and, via twisted paths, led us to re-think both our language and how to use it.

Corso was no saint, and Ginsberg almost dangerous. I never met Corso, but did encounter Ginsberg briefly, back in London's mid-1960's (I think he was appearing at the Albert Hall). I remember politely asking him if there was anything I could get for him (meaning drink etc). He replied "What I'd really like, is a young boy". I ignored his request.

Friends be kept
Friends be gained
And even friends lost, be friends regained. Gregory Corso.

I still read poetry from the Beat/Howl era. With Kerouac and Burroughs it's probably the best writing of its time. I doubt if any of today's poets will have the same dramatic influence as they did.