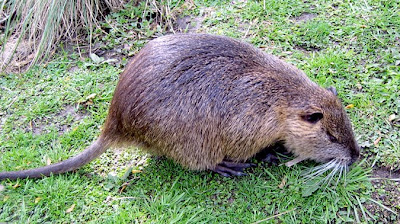 At about 7.30am this morning, I was sitting at my laptop, minding my own business, when I saw something in the field outdoors, moving in the slightly foggy morning light. At first I thought it was Freddie (our tabby cat) chasing a mouse, but it didn't seem to have quite the right silhouette. The creature was hunched over, and instead of the beautiful furry tail of our Freddie; it sported a long, bare, and pointed one, like that of a huge rat.

I watched it for a while through the window, then realised that it was something I'd never seen before. I grabbed my small camera and followed it hot-slipper through a recently grazed cow pasture (yes, there was!). It didn't seem too concerned about my presence and I ran along beside it for quite a while, as it went down the field towards our old house.

When I was within about five yards of it, it stopped, turned round, and looked at me. I approached cautiously, took a few photos, then watched as it turned and scampered off towards a small chestnut copse.

This rather ugly creature was, of course, a Coypu; known here in France as a 'Ragondin'.

I have never seen one before, but have always been aware of their existence. In the East Anglian fen-lands (where I was at school) they were particularly hated by farmers, as their persistent digging would destroy the water-draining dyke systems. Here in France I think they have the same reputation, and are often shot on sight; and eaten.

Unfortunately the photos I took were either too blurred or too distant, so I've used a stock picture as illustration.

I'm really pleased that I saw this creature. A little insignificant event such as this morning's makes one's life so much richer. Even if was an ugly orange-toothed Coypu.