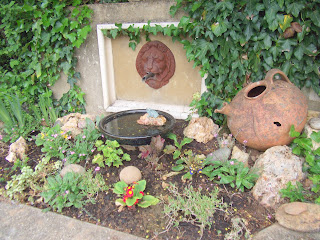 The fountain's stopped working. The fish have all died. And Cro has become both pissed-off and slightly depressed.

The perfect combination of events to force a radical decision. So I've filled-in the old fish pond with earth, and we now have a mini 'small plant' garden instead of murky water. The birds and animals have a drinking bowl instead of a water-lily encrusted quagmire.

All seems OK. Freddie (our cat) discovered the new water supply very quickly, but I have yet to see a bird drinking there; although signs suggest that they have been.

For the moment I've just bunged in any small plants that I could find (plus a few that I bought), and am hoping that they will spread. I know nothing of garden plants, so I go with the 'trial and error' method. My main objective, eventually, is for thick tufts of aubretia to tumble down over the front, and the rest to be a mass of ground-hugging flowers; only time will tell.

In the bottom right corner are two discus shaped stones; one large, one small. These are two fosilised bivalves that I found nearby. No doubt several million years ago, my house would have been under water..... but with 'oysters' (or similar) like that on hand, I don't think I'd have complained too much.
Posted by Cro Magnon at 06:56