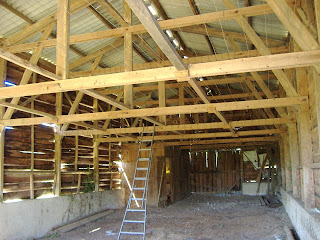 For those who've not ventured into such secretive enclaves, this is the interior of a bog-standard French tobacco drying barn.
The complete stems of tobacco were suspended from wires (on two levels) and left to dry in a haphazardly-controlled current of air; the weight of the plants was enormous. In winter, the barns were then used for the stripping and sorting of the leaves, before sending them off to the state buyers; in our case, to Bergerac. The tobacco eventually ending-up as those Gauloises or Gitanes fags, so evocative of France.

We have recently acquired the above barn, and will probably put in an upstairs floor, with loo, shower, and window, to make a very large studio/workshop area. The whole barn measures 20 by 7 metres; effectively giving us 280 square metres of extra usable space.

The growing of tobacco has now all but finished in this area. Developers must be rubbing their hands.

p.s. Some barmy American smart-arse 'preacher' (something Evans?) has declared that the world will end tomorrow. So goodbye everyone; it's been great knowin' y'all...... I'll see you again when he's gone!