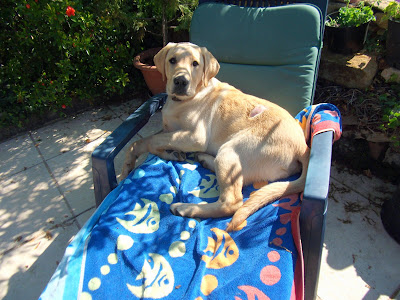 Since his encounter with the processionary caterpillar (to which he lost a good part of his tongue), he's now developed a couple of half-tennis-ball sized lumps on his sides, which have been shaved and are being treated with some anti-inflammatory 'horse' balm.

The vet' thinks this could be a reaction to where he was previously given his jabs. Cortizone has strange side-effects.

So, you relax by the pool dear Monty. You deserve a little pampering. We'll bring you your lunch later!