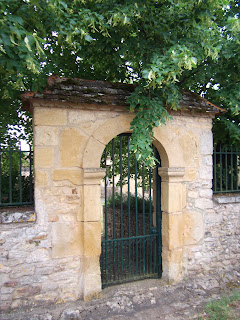 This is the entrance to a rather nice nearby house, whose 'doctor' owner lives less than 100 kms away in Brive, which is in the Correze (we are in southern Périgord). He usually spends two weeks in the summer here, and occasionally a short while at Easter. 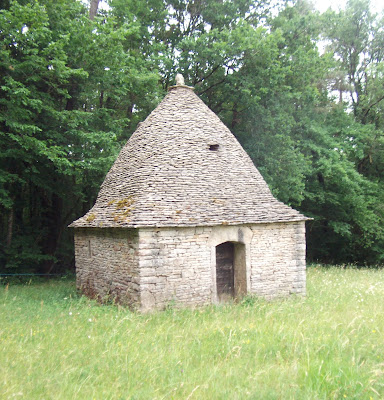 About 35 years ago, his late father built this 'Borie', at the bottom of a small paddock, which looks back up to the house. At the time I lived about 200 metres away, and I made a point of walking by the site every day when it was originally being built; and observed the whole process from nowt to finished.
The stone, the builders, and the style all came from the Correze. He wanted, when in Périgord, to be reminded of his home back in Correze. A little like dining in a Chinese restaurant, but keeping a side plate of tripe-n-onions in view, just for reassurance.
It's a beautiful little building, built entirely of stone. But somehow (to me) it looks wrong in its present surroundings. The stone is hard grey and angular, whereas our local stone is soft and honey coloured (see top picture). And the style is too extravagant for our (probably) much poorer area. Our local 'Bories' are much smaller and more simple affairs.
I would have thought that if, when away, he always wanted to be reminded of home, it would probably have been better to have stayed there. It would have been cheaper too!