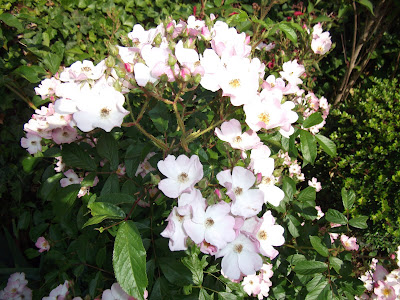 My friend Philippe, who is a professional gardener and plantsman, gave me this rose about 6 years ago. It grows down by the pool pump-house, so I'm seeing quite a lot of it at the moment.

When I asked for its name, I was told it was called 'Peenk Peexy' (Pink Pixie).

Some years later I was telling him how well his Pink Pixie was doing, and he said he'd never heard of a rose called Peenk Peexy.

'We gardeners make theengs up' he replied. My faith in plantsmen has all but gone, but not in the Peenk Peexy.

(If anyone now tells me that its name really is Pink Pixy; I shall spit)