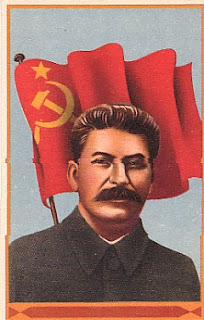 I don't know what made me think of Stalin this morning; maybe it was knowing that he'd had several painters SHOT for producing unflattering portraits.

In the Diplomatic world there are only four embassy postings of true kudos; London, Washington, Moscow, and, the most prestigious, Paris. My late father-in-law had Washington and Moscow (amongst others), but sadly he was never offered Paris.

Stalin famously said "A sincere diplomat is like dry water, or wooden iron" (I expect it sounded better in its original Russian). Whilst in Moscow, my father-in-law had to deal with the unpleasant Mr Stalin, and such outbursts cannot have made life easy.

There is a morbid fascination for tyrants who slaughter their own people. Hitler, Saddam, Gadaffi, and even (unwittingly) Napoleon. But I suppose one simplistic view of retaining power is always to kill off the opposition. I wonder if Europe will ever see another of their ilk.

'Stalin' might be a good name for an pompous strutting cockerel; I'll let you know.
Posted by Cro Magnon at 07:24