Why Whine About Wine. 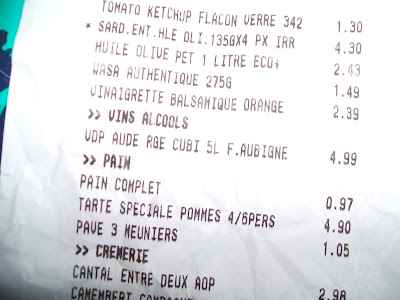 On returning from the supermarket yesterday morning, I screwed up my bill, and chucked it (as usual) in the bin.

Nothing odd about that, you might say. But then I thought I'd have a quick look at how much certain things had cost (I don't normally bother with such banalities).

I'd bought a 5 litre 'cubi' (plastic container) of red wine; made in the Aude region of France. It's not Pétrus; nor is it vinager. It's a perfectly good drinkable wine for which one would probably pay about £4 a bottle back in the UK.

Can anyone beat that?