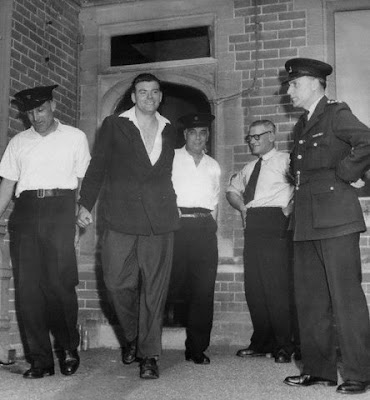 Frank 'the axeman' Mitchell was a big, slow-witted, criminal thug, who was rightly sentenced to life imprisonment.

In December 1966, the East End's infamous Kray Brothers 'sprung' him from Dartmoor Prison, and set him up in a London flat; complete with female company and a few 'minders'. The reason for this is complicated and somewhat immaterial.

I was living in Lillie Road, Fulham at the time, and talk of Frank Mitchell was everywhere; he was an extremely violent and unpredictable man, and everyone in London was told to keep a very careful eye out for him.

Several days after his escape I was rudely awoken in the middle of the night by a bunch of gun-toting, dog-handling, special-squad cops, who dragged me from my bed, held me beneath a light bulb, and compared my sweet face to that of ugly Mitchell's. They then quickly abandoned me and rushed off to continue their search of the house.

Eventually they returned to apologise, and explained that someone had phoned to say they'd seen a man who looked like Mitchell entering one of two Lillie Road houses. They had obviously been mistaken.

The Kray Brothers eventually ordered his 'execution'; he was simply too uncontrolable, and too violent. They paid some heavies to have him shot.... RIP Frank.