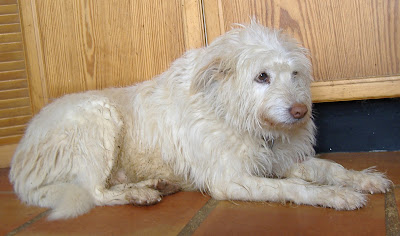 Molly was not my dog; she was simply my niece, and I her uncle. When her owner, Terry, was away she always came to stay with me, and my home became hers. I like to think that she was almost as much at home here, as she was with Terry (but not quite).

Molly was born in Dubai. Terry found her wandering the streets, and took her in. Eventually she came to live in France in July 2001.

Luck was certainly on her side. Normally she would have remained simply a Dubai 'street dog'; a target for small local boys and their pockets filled with pebbles. But Terry saved her, and luckily she spent nearly all of her 13 years enjoying the best of conditions. Here in France she had the run of the most perfect countryside.

Yesterday she left us; she had been ill for some time.

So, off to dog-paradise with you Molly. You've had it pretty good, and maybe that's all that a stray can expect. We'll all miss you terribly, especially me; your faithful uncle Cro. xx