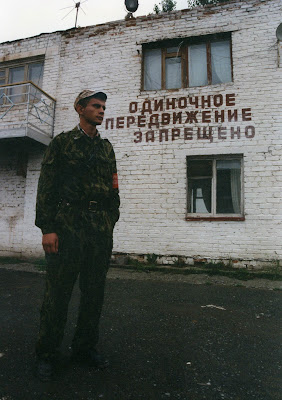 It is no secret that Colonel Steve Tomson and I met, in 1970, whilst studying Mechanical Linguistics together, at Moscow's No 5524 School of Military Engineering.

The Head of the Department of Mechanical Linguistics, Dimitri Ogronov, was an interesting man. He ate and drank on 'even' dates only, so had never eaten a Christmas lunch/dinner, nor properly celebrated his own birthday (which fell on the 13 March). If a month ended on an 'odd' date, he would then not eat for two days. He was a man for whom self-flagellation would have been administered with relish.

Dimitri had two jobs. By day he lectured officer-cadets on the advantages of encouraged information, and by night he constructed the wherewithall to encourage such information. It was Dimitri who invented Ogronov's Chair; an electrical torture device of uncertain practicality.

Ogronov's greatest legacy, however (for which he was postumously awarded the Lenin Medal 3rd Class), was a method of twisting rope for naval usage. This was never adopted by the Russian Navy, but was much appreciated by Russian women who used the method to twist hair into large coils which were then pinned to each side of the head. This style of hair-dressing is still known in Russia today, as 'The Ogronov Coil'.

Colonel Tomson eventually ran off with Ogronov's 14 year old daughter Olga. For nearly a week they lived (outrageously happily) together near Murmansk, where they both worked at the Glorious No 17 cod-liver-oil processing factory. Olga sadly later exploded, and Steve Tomson returned, heartbroken, to his native country of Romania, where he opened a broken-biscuit factory.

As for me, I shall always be grateful to Dimitri Ogronov. He taught me how to perform certain Cossack style dances, and how to drink pints of Vodka without appearing to be drunk (this, incidently, is done with the aid of a coat hanger, and several drawing pins). Steve and I spent many happy days at the No 5524 School, not least of which were spent introducing winter Pantomimes to a bemused Russian public. We put on productions of 'Piss in Boots', 'Sin-derella', and 'Wittington's Dick'. The productions were cheap but wonderful. Happy Days!

Above is the only known picture of Dimitri Ogronov. It was taken on an 'odd' non-eating day; hence his lackluster expression.