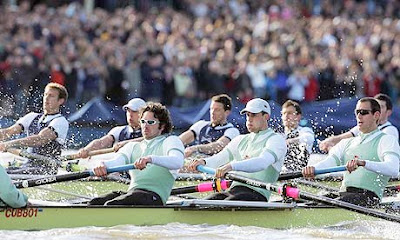 It's almost time for the Oxford v Cambridge Boat Race (tomorrow?). This is one of those events that seems to be watched all around the world, with people (who have nothing to do with either of the two universities) taking very distinct sides. Never watched for fun; your side HAS TO WIN.

Less well known about the Boat Race is that both universities have a 2nd Crew. For Oxford it's called Isis, and for Cambridge it's Goldie (on Boat Race day, they race just before the main event).

I was at school just outside Cambridge and the Goldie crew would often train on our stretch of river (the Great Ouse), occasionally leaving their boat in our boathouse.

A good START to any race is essential, and boat racing is no exception. On several occasions I remember practicing our starts against Goldie, and they simply flew ahead of us in seconds. Of course they were older and stronger, but the force they put into their first few strokes was unbelievably impressive.

Rowing is a tough old game, and requires a huge amount of dedication. I salute these guys; I know how much they have to suffer. I was more of a fair-weather-oarsman; much more sedate.