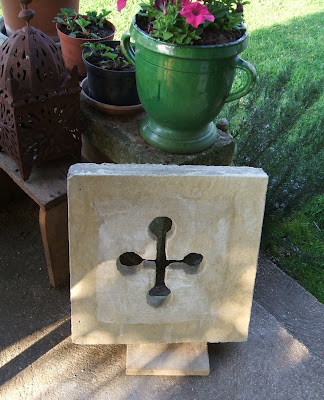 Sculptor Tom Stephenson will probably weep blood on seeing this, but as an ex-jobbing-sculptor myself, I do now occasionally give in to modern short-cuts, and abandon my hammer and chisel in favour of concrete mixer and trowel.

When our builder has time, he will start to construct our long-awaited 'tower', and I require a few 'features' to insert. I've already bought a very beautiful 'oeil de beouf' window; this is a local style horizontal oval window that usually goes above a doorway or window. And I've also just finished making a, 50 cms by 50 cms, medieval style 'arrow slit' opening (above).

I cast it in concrete, having used polystyrene for the mould, and then dug out all the unwanted polystyrene leaving what you see. A little stone-coloured mortar was brushed over, and a very small area of washed-on plaster finished the job. There is a square rebate, on the other side, to take a tiny glass window. It still needs a little more ageing, but a pot of yoghurt should fix that.

I know that Mr Stephenson would never agree with me, but concrete occasionally fits the bill. If I'd done the job in stone it would probably have taken me more than a week; and as we both know, on a job like this, one small slip......