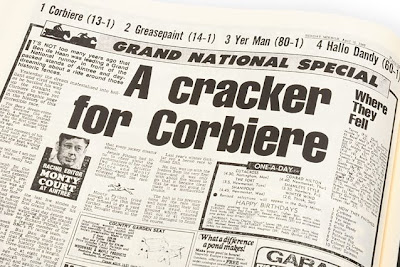 Yesterday was 'Grand National' day over in the UK.

I'm not a betting man, so if I pick a horse, it's because it's called Cro's Crawler, or Magnon the Moocher. Not because some pundit says it's a sure winner. Someone once said (probably Groucho Marx) that one should always bet on the fastest horse with the lightest jockey; but how one would know about these things, I have no idea.

In 1983 I was back in England for the Grand National; a horse-race that even rural-deans and mothers-superior place bets on.

I don't think I've ever been into a betting office in my life, so it was fortuitous that the landlord of my local pub', a sour-faced and pot-bellied character named Fred, took bets from favoured locals, and laid them off with his bookie in the nearby town.

The name CORBIERE jumped out at me from the morning's paper; it's the name of a French wine producing area, so the signs were good. At lunchtime I asked Fred if he'd place a bet for me; he said he would, so I put five quid 'on the nose' to win.

I knew most of the basic details. Jenny Pitman was the trainer, Ben de Haan was the pilot, and the starting price was 13 to 1.

Amazingly my horse won, and that evening Fred paid me SIXTY FIVE quid. He had a strangely tortured expression on his face as he counted out, and handed over, the money. I'm certain he'd taken on the bet himself, and NOT laid it off with his bookie. In which case it served him right, as I presume he'd been hoping to pocket my 'easy' fiver.