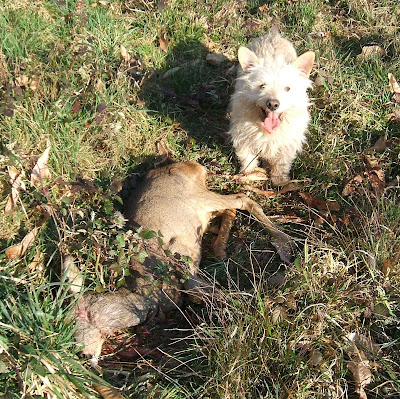 Yesterday morning (March 17th) I heard a terrible cry coming from the woods; it sounded like a large bird. I rushed outside and with the aid of my binoculars I spotted Oscar (the white dog) busying himself with some prey; they were about 200 metres from the house.

I grabbed my camera and walked 'briskly' to the spot; not knowing quite what to expect. I was amazed to find that Oscar had caught himself a Roe Deer.

Unfortunately he hadn't finished the job, so, having taken a couple of pictures I returned to fetch my 'priest' (it administers the last rites), and with a couple of shots made sure that it was dead.

Fresh venison doesn't come my way too often, so I phoned a friend. Sadly, he informed me that as it had been caught by a dog (especially an old slow-coach like Oscar) it was bound to have been previously either ill or wounded, and as such was not recommended for the pot.

I have just returned from dumping it deep in the woods. No doubt other creatures will feed off it for a while. As for me; it'll have to be pasta again.

Disclaimer: Oscar is NOT my dog.