My Mother and a Fishing Rod. 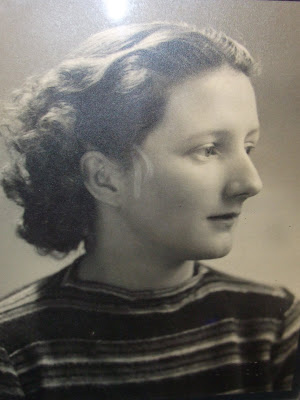 May I introduce my late mother. It's amazing, she's almost a double for my youngest son; a wonderful thing, genetics.

Mother was a spender; there was nothing in life she enjoyed more than spending money; either on herself or on others.

At one time, after having read an article in the Financial Times, she became the owner of one of the best private collections of boxed pairs of dualing pistols in the UK. She simply went out and bought every pair available by the top quality gun makers Egg, and Manton (as advised by the FT). Then just prior to a world trip that my parents took together, I took the whole collection to Sotherby's for her; and that was that!

Like many women (I suspect), she would buy large quantities of clothes and hide them away so that she was able to say, at a later date, 'Oh, I've had it for ages'.

Way back in the 60's I remember her buying a stainless steel sink and taps. She had absolutely no need for such things, but simply considered them a bargain. They remained in a shed for many years until I eventually found them a home. I could go on with a thousand other examples, but I'm sure you get the picture.

I'm writing all of this because, as our house is in complete turmoil at the moment, strange things are turning-up. I've just found an old fishing rod that she bought for me at an auction in the early 80's. It's in a long green rod bag, and, I think, has never been opened (certainly never by me); so I'll go and do that now. 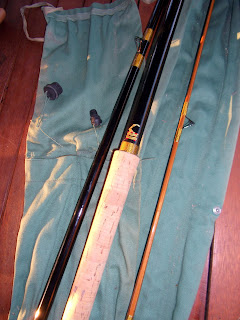 And here it is. It's in pristine condition, and obviously well made. The makers name is Milward, but that means nothing to me. This is the first time it's seen daylight for over 30 years (maybe a lot longer); I just hope it doesn't suddenly turn to dust.