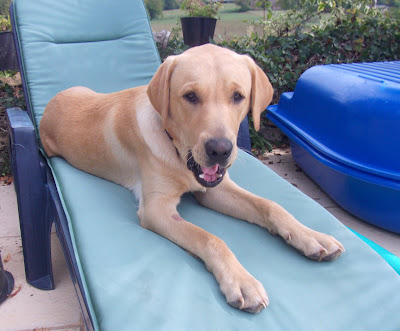 Poor old Monty's still a little sore in the you-know-where dep't; well YOU would be too if you'd just had your bollocks snipped.

However, he's OK; and, between snoozes by the pool, is running around much like before. His mate Bok is being kept away for a while as their play fighting (that usually lasts for most of the day) is a little rough, and could easily see his stitches busting.

We'll keep him quiet for at least 10 days, by which time he'll be all healed up and barking in castrato. Poor bugger! Stitches out on Monday.

p.s. Monty is now 9 months old, and weighs a staggering 38 Kgs (about 84 lbs). No longer the wee puppy we remember from the beginning of the year.