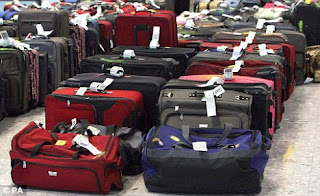 Edward (my son-in-law's dad) told me this story the other day.
He was at some airport in America (probably en route to his Naples Florida home) and was waiting for his suitcase to arrive on the conveyor belt. Suddenly he saw it emerge from the unknown, and just before it arrived at where he was standing, an arm reached out and grabbed it.

Edward approached the man and said 'Excuse me sir, you've got my suitcase'.

The man replied. 'This is MY suitcase'.

Edward continued 'I think you'll find that it has MY name on the label'.

The man said 'No, it has MY name on the label'.

At this point Edward grabbed the suitcase, looked at the label, and said 'There you are sir, Edward X: it's mine'.

The other man replied 'That's MY name! I am Edward X'.

Edward then had a much closer look at the disputed article, and could see that it was, in fact, NOT his suitcase.

Amazingly the two men owned the exact same suitcase and had the exactly the same names; coincidence or what!

Edward then returned red-faced to the conveyor belt, where his own case was doing the rounds.
Posted by Cro Magnon at 06:56