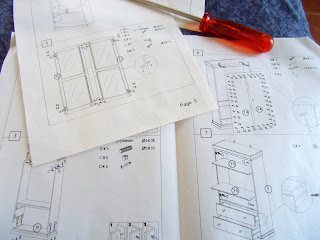 Don't you just detest bloody flat pack furniture. Mind you, these Chinese chappies are very clever when it comes to squeezing as much as possible into cardboard cartons. There it all is, surrounded by bits of polystyrene, hardboard, and a strange fleecy plastic wrapping material. These cartons also contain the now mythical instruction details (above); complete with an estimated time for assembly. Mine said 2 hours; it actually took all day.
Here's the small armoire that I foolishly ordered several months ago through the French catalogue 'La Redoute'. It arrived in two scary cardboard cartons; I could tell at once that it was going to cause trouble. 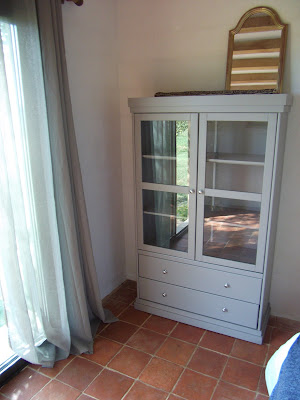 So, what did we end up with.... An armoire that is much smaller than it's catalogue picture suggested. I'd wanted to buy an antique walnut armoire, but they are SO EXPENSIVE. Anyway, this will do for the moment; it's only to be used for storage, I'll probably replace it later, it can always be used somewhere else.