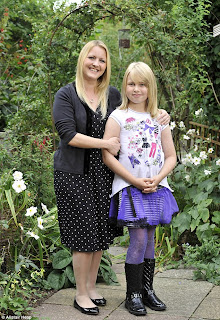 British newspapers are filled with the tale of 10 year old Livvy James; seen here, above, with her mother.

When Livvy left her Worcester school at the beginning of the summer holidays she was still known as Samuel, but now when returning for the autumn term she will be known as Livvy. She has changed from being a boy, to being a girl.

When I was at prep' school I had a friend called Richard Hunter. He was extrovert, flamboyant, and theatrical; what one nowadays might call 'camp'. In the summer holidays he would always come to my birthday parties, where my mother would occasionally perform simple magic tricks. Richard was so impressed that, at one such party, he asked her if she could turn him into a girl.

I really though nothing of his strange request, other than it obviously lodged in my mind (we were probably only 7 or 8 at the time; maybe less). Now, of course, I see what a nightmare it must have been for poor Richard; just like Livvy, he had the brain of a girl, but the body of a boy.

Over the years I've tried to find Richard, but so far no luck. I'd love to know if his wish came true. Maybe he's now called Rachel, and that's why I can't find her.

p.s. Richard had been born a twin. One day he and his brother were kicking a ball about outside their house, and the ball rolled down their sloping driveway into the road. His brother rushed down to retrieve it and met a speeding lorry.
Posted by Cro Magnon at 06:28